Children's Book Club in a Bag

Book Club in a Bag 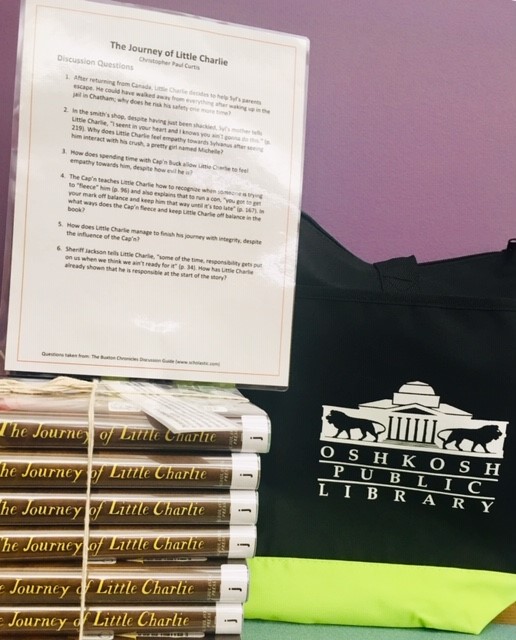 The Wild Robot (8-11)
by Peter Brown
When robot Roz opens her eyes for the first time, she discovers that she is alone on a remote, wild island. She has no idea how she got there or what her purpose is - but she knows she needs to survive.

Hello, Universe (8-12)
by Erin Entrada Kelly
In one day, four lives weave together in unexpected ways. Virgil Salinas is shy and kindhearted and feels out of place in his crazy-about-sports family. Valencia Somerset, who is deaf, is smart, brave, and secretly lonely, and she loves everything about nature. Kaori Tanaka is a self-proclaimed psychic. And Chet Bullens wishes the weird kids would just stop being so different so he can concentrate on basketball.

The Journey of Little Charlie (9-12)
by Christopher Paul Curtis
Twelve-year-old Charlie is down on his luck: His sharecropper father just died and Cap'n Buck -- the most fearsome man in Possum Moan, South Carolina -- has come to collect a debt. Fearing for his life, Charlie strikes a deal with Cap'n Buck and agrees to track down some folks accused of stealing from the cap'n and his boss. Will he be able to turn in people he knows and works with?

The Story of Diva and Flea  (4-8)
by Mo Willems, Tony DiTerlizzi
For as long as she could remember, Diva lived at 11 Avenue Le Play in Paris, France. For as long as he could remember, Flea also lived in Paris, France - but at no fixed address. When Flea flâneurs past Diva's courtyard one day, their lives are forever changed. Together, Diva and Flea explore and share their very different worlds, as only true friends can do.

Wishtree  (8-12)
by Katherine Applegate
Warm and thoughtful, this story is told from the perspective of an ancient oak tree who has seen it all. Bestselling author Katherine Applegate gets readers rooting for the old tree, along with the people and animals who come to depend on it.

A Boy Called Bat (6-10)
by Elana K. Arnold
For Bixby Alexander Tam, a young boy on the autism spectrum life tends to be full of surprises—some of them good, some not so good. Today, though, is a good-surprise day. Bat’s mom, a veterinarian, has brought home a baby skunk, which she needs to take care of until she can hand him over to a wild-animal shelter.

Ghost (10 & up)
by Jason Reynolds
Running. That’s all Ghost (real name Castle Cranshaw) has ever known. But Ghost has been running for the wrong reasons—it all started with running away from his father, who, when Ghost was a very little boy, chased him and his mother through their apartment, then down the street, with a loaded gun, aiming to kill. Since then, Ghost has been the one causing problems—and running away from them—until he meets Coach, an ex-Olympic Medalist who sees something in Ghost: crazy natural talent.

The Secret Lake: A Children's Mystery Adventure (8-11)
by Karen Inglis
When Stella and her younger brother, Tom, move to their new London home, they become mystified by the disappearances of Harry, their elderly neighbor's small dog. Where does he go? And why does he keep reappearing soaking wet? Stella and Tom soon discover that they have travelled back in time to their home and its gardens almost 100 years earlier. Here they make both friends and enemies, and uncover startling connections between the past and present.

The Lemonade War (The Lemonade War Series Book 1)
by Jacqueline Davies   (8-12)
Evan and his younger sister, Jesse, react very differently to the news that they will be in the same class for fourth grade. As the end of summer approaches, they battle it out through lemonade stands, each trying to be the first to earn 100 dollars. Includes mathematical calculations and tips for running a successful lemonade stand.

Mudshark  (8-10)
by Gary Paulsen
Mudshark is cool. He's fast-thinking and fast-moving, and with his photographic memory, he's the go-to guy with the answers. Lost your shoe? Your dad's car? Can't find your homework? Ask Mudshark. At least, until the Psychic Parrot takes up residence in the school library.

Space Case (8-12)
by Stuart Gibbs
Like his fellow lunarnauts living on Moon Base Alpha, twelve-year-old Dashiell Gibson is famous the world over for being one of the first humans to live on the moon. And he’s bored out of his mind. Kids aren’t allowed on the lunar surface, meaning they’re trapped inside the tiny moon base with next to nothing to occupy their time—and the only other kid Dash’s age spends all his time hooked into virtual reality games. Then Moon Base Alpha’s top scientist turns up dead. Dash senses there’s foul play afoot, but no one believes him. Everyone agrees Dr. Holtz went onto the lunar surface without his helmet properly affixed, simple as that. But Dr. Holtz was on the verge of an important new discovery, and it’s a secret that could change everything for the Moonies—a secret someone just might kill to keep.

The Bicycle Spy (8-12)
by Yona Zeldis McDonough
Marcel dreams of competing in the Tour de France bicycle race. But ever since Germany's occupation of France began two years ago, in 1940, the race has been canceled. Now there are soldiers everywhere, interrupting Marcel's rides with checkpoints and questioning.

Escape from Mr. Lemoncello’s Library (8-12)
by Chris Grabenstein
Nobody loves games as much as Kyle Keeley, and Luigi Lemoncello has designed a new library and a new game for its opening day. Kyle knows it will be epic because Mr. Lemoncello is the most famous game-maker in the world. Dive in for fun and hilarity as Kyle and his friends try to escape Mr. Lemoncello’s library.

A Wrinkle in Time (10-14)
by Madeleine L'Engle
In this first book of the Time Quintet Series, young characters Meg Murry, Charles Wallace Murry, and Calvin O'Keefe embark on a journey through space and time, from universe to universe, as they endeavor to save their father and the world. The novel offers a glimpse into the battles between light and darkness, goodness and evil, as the young characters mature into adolescents on their journey.

Because of Winn-Dixie (9-12)
by Kate DiCamillo
Ten-year-old India Opal Buloni has just moved to a trailer park in the small town of Naomi, Florida, with her father. While in the supermarket, Opal sees a scruffy dog wrecking the store and decides to take him home. That summer is filled with changes and adventures... because of Winn-Dixie.